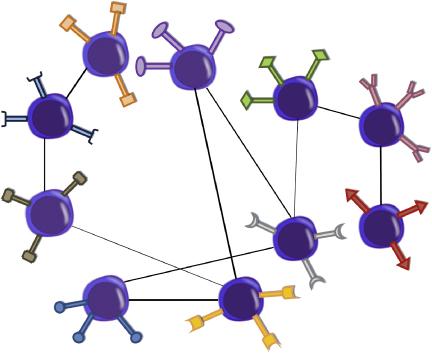 The immune system must simultaneously recall multiple defense strategies because many antigens can attack the host at the same time.

Pattern-diluted associative networks were introduced recently as models for the immune system, with nodes representing T-lymphocytes and stored patterns representing signalling protocols between T- and B-lymphocytes. It was shown earlier that in the regime of extreme pattern dilution, a system with NT T-lymphocytes can manage a number $N_B!=!\order(N_T^\delta)$ of B-lymphocytes simultaneously, with δ!<!1. Here we study this model in the extensive load regime NB!=!αNT, with also a high degree of pattern dilution, in agreement with immunological findings. We use graph theory and statistical mechanical analysis based on replica methods to show that in the finite-connectivity regime, where each T-lymphocyte interacts with a finite number of B-lymphocytes as NT→∞, the T-lymphocytes can coordinate effective immune responses to an extensive number of distinct antigen invasions in parallel. As α increases, the system eventually undergoes a second order transition to a phase with clonal cross-talk interference, where the system's performance degrades gracefully. Mathematically, the model is equivalent to a spin system on a finitely connected graph with many short loops, so one would expect the available analytical methods, which all assume locally tree-like graphs, to fail. Yet it turns out to be solvable. Our results are supported by numerical simulations.