The network of countries and products and the two possible projections. 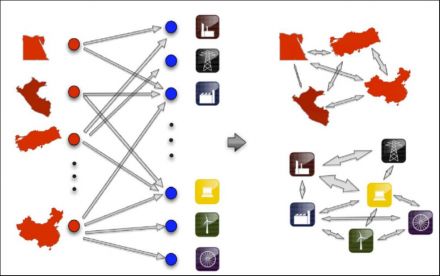 In this paper we analyze the bipartite network of countries and products from UN data on country production. We define the country-country and product-product projected networks and introduce a novel method of filtering information based on elements’ similarity. As a result we find that country clustering reveals unexpected socio-geographic links among the most competing countries. On the same footings the products clustering can be efficiently used for a bottom-up classification of produced goods. Furthermore we mathematically reformulate the ‘‘reflections method’’ introduced by Hidalgo and Hausmann as a fixpoint problem; such formulation highlights some conceptual weaknesses of the approach. To overcome such an issue, we introduce an alternative methodology (based on biased Markov chains) that allows to rank countries in a conceptually consistent way. Our analysis uncovers a strong non-linear interaction between the diversification of a country and the ubiquity of its products, thus suggesting the possible need of moving towards more efficient and direct non-linear fixpoint algorithms to rank countries and products in the global market.